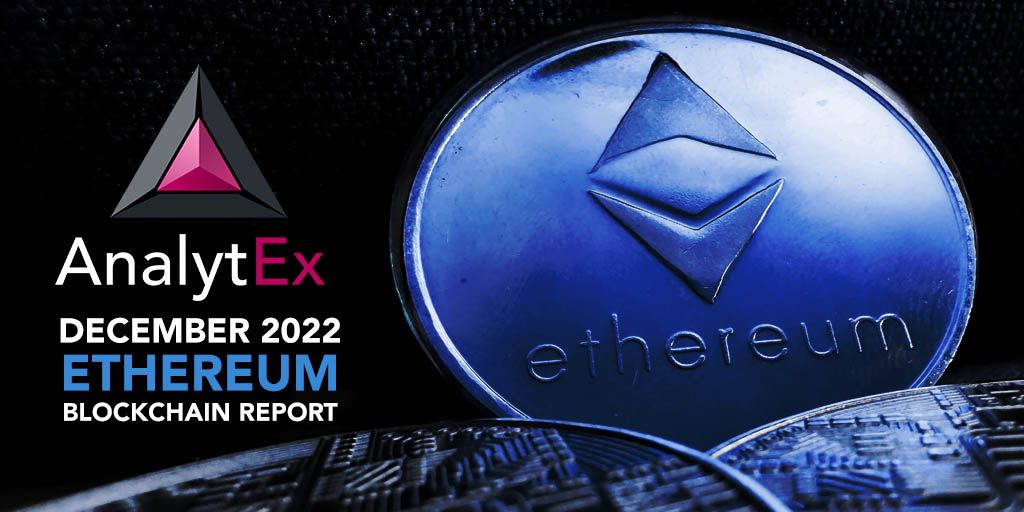 In December, the index showed an average of 48 points, which is a little bigger than previous months.

Interestingly, the peak of activity falls on the 9th-10th day of each month for several months in a row.

The highest average number of transactions in December was made on the ninth with a peak of 1,932,711 transactions.

Average number of Ethereum blocks per day has changed by just 0.01%

Ethereum total block size per month has increased by 5.36%

The average block size was 0.51 Gb in November. In December, this value was 0.52 Gb. The average size of blocks mined per day has increased by 1.96% like in the previous month.

The Eth Total Block Size Per Month, Gb chart shows that the total block size in November was 15.28 GB, in December it was 16.1 GB. The value has increased by 5.36%.

The number of ERC-20 tokens created in the Ethereum network in December increased by 3.66%

The number of ERC-20 tokens created on the Ethereum network in December was 9,382, In November this figure was 9,050. It has increased by 3.66%. Only the Ethereum blockchain shows a slight increase in this indicator, the rest of the EVM Competible blockchains reduced this indicator, or remained at the values of the previous month.

In November, the average number of unique active crypto wallets per day in the Ethereum blockchain was 401,577, in December this figure was 427,498, so it is an increase of 6.45%. The indicator is up compared to November, but still well below the Autumn values.

In terms of price action, ETH peaked at roughly $1,650 in November before a big sell-off that was triggered by the collapse of the FTX cryptocurrency exchange. On November 22, ETH found support at $1,080 and proceeded to recover towards $1,300 at the end of the month. In the crash in early November, ETH dropped below its 50-day simple moving average, and it has stayed under this key moving average since. Interestingly enough, the $1,650 top in November touched the 200-day simple moving average, but there wasn’t enough bullish pressure to break through.

During November, the RSI for Ethereum stayed in the neutral zone, except for a very brief time on November 8 when it entered the oversold zone. After this, the RSI slowly climbed towards 53.5, and stabilized around this level.

At moment of writing, it’s difficult to imagine a bullish short-term narrative for ETH, as most technical indicators are flashing bearish signals.

In terms of data, December continues the downtrend in every way, from the decline in the number of transactions to the decline in the cost of gas. At the same time, statistics are improved by single peaks, usually associated with mints of NFT collections, such as, for example, December 9th. All EVM Compatible blockchains have seen a decline in the creation of new tokens, with the exception of the Ethereum blockchain, in which this indicator has slightly increased, as well as the number of active wallets. What awaits us in the new year, we will know very soon.